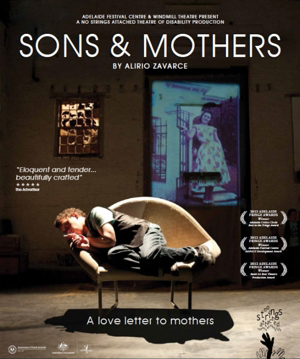 Written, devised and directed by Alirio Zavarce with and for the Men’s Ensemble of No Strings Attached, Sons and Mothers is a love letter to mums. Swelling with heart and humour, six sons tell the stories of their mothers as they recount their lives from childhood to adulthood, and the stumbles and triumphs they encountered along the way.

These are love stories, made all the more potent because of the disabilities the men live with, and their humbling take on the discriminations they’ve faced.

Premiering at a sold-out season in the 2012 Adelaide Fringe, Sons and Mothers was awarded three coveted Fringe awards including Best Theatre Production. It is a celebration of one of life’s most intimate relationships.

A feature film of the creative process behind Sons & Mothers has been made by local production company POP Pictures, also titled Sons & Mothers, premiered in October 2013 as part of the Adelaide Film Festival.

The 2013 season was a sell-out, and  received standing ovations and rave reviews.

"...the performers and director, as well as those behind the scenesdefinitely deserved the standing ovation that greeted them."
Glam Adelaide, James Rudd, 21 October 2013


"...playful, cheeky, sometimes sad, but in every case it is powerful as it is evocative..."
DB Magazine, David OBrien, October 2013

"This film will leave you rethinking what it means to be disabled, a parent, a son and wanting to know where and when you can see the amazing stage show documented in this fantastic film."
ABC Reviews, Quentin Kernihan, 22 October 2013
Rating:  [4.5 stars]