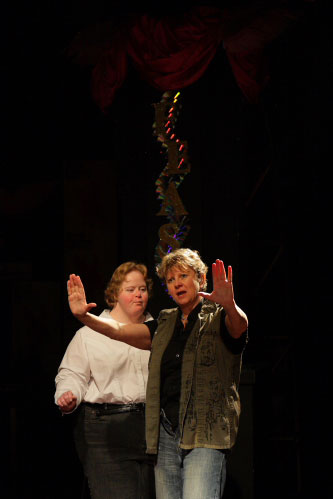 What happens when a local femme with no secrets meets an international butch with no brakes? Magic! One has Down Syndrome, the other a Brain Injury (and a seriously checkered past) ...

Rachel has been a performer with No Strings Attached since 2002. Julie is a performer well-known on international disability arts and queer arts circuits. They met at the 2006 Art of Difference Conference in St Kilda, Victoria.

Since it's conception, Steak n' Chelsea (working title) has been developed in partnership with Feast, Adelaide's annual festival of queer arts and culture. Julie's trips to Adelaide have been supported by Arts Council England. Two development stages have been supported by the Richard Llewellyn Arts and Disability Trust.

For the final stage of script development (mid-2010), Rachel and director Maude Davey will collaborate in Adelaide. Julie will join them via Skype, then return to Adelaide for October rehearsals and the full production in Feast, 23-27 November 2010.